Is it so wrong that we want to discover the most intimate goings-on of America’s most famous house?

Well thanks to Bower we can say we have some idea. Through interviews with several former and current staff members, Bower opens a world that few get to experience.

The White House is America’s most famous residence and it houses America’s most famous family. What Bower shows us however, is that the First Family is not the most important group with the house’s walls. Bower interviewed several White House staff members from maid Betty Finney all the way to Barack Obama’s private secretary Reggie Love, and has collected stories from those who were closest to all of the families that lived in the famous house, showing that many of the members of the First Family are just as human as you and I.

The most amazing part of this book was the stories from those staff members who spent 20-plus years working in the house and had seen multiple families come through. I was truly impressed by the stories of the staff members that willingly sacrificed marriages, time with children, even their own lives for the job.

Bower does an amazing job using the interviews to highlight the similarities and differences between the several occupants of the White House. She also does a good job at letting the reader in on some White House secrets and odd idiosyncrasies of former presidents (i.e. JFK’s naked swims and LBJ’s weird obsession with his shower).

My favorite part though, was the staff stories and reactions to major historical events. There was the high tension during the Iran Contra Affair; the heartbreak and sadness during the aftermath of the Kennedy assassination; and the shock and fear as staffers recant how they literally had to “run for their lives” on the morning of September 11th 2001.

I myself cannot imagine working in an environment of such prestige and trying not to make a big deal about it. I recommend this book to all kinds of readers. It is an endearing journey through history.

And if that can’t sway you… Just read it for the story of how Hillary clocked Bill in the face with a book. Classic. 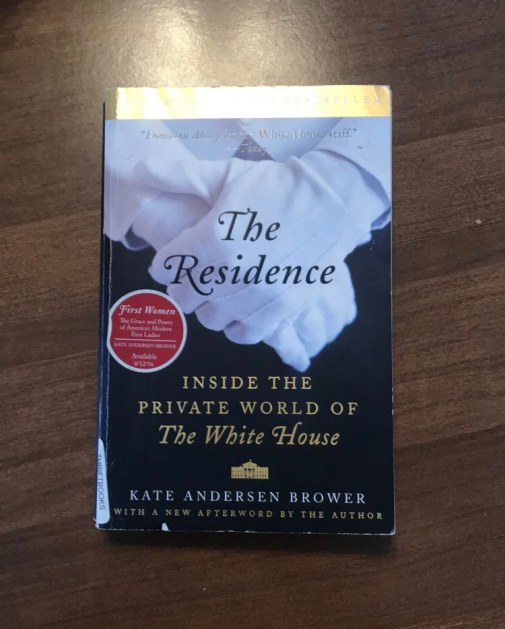