The conclusion to Schwab’s series about the three Londons is nothing short of breathtaking. Five hundred pages and it took me only 72 hours to finish because I was so enthralled.

Kell, Lila, Alucard Emery, Prince Rhy Maresh, and Holland embark on a journey to save Red London from a dark force from Black London called Osaron. The ghost-like demon tried to take over the Maresh empire by infecting all of its inhabitants, but the royals of the empire are hard to control and hard to kill. The group must find a way to beat a force that can control different hosts and promises mercy.

The writing of Schwab is beautiful. The story is woven through several different points of view including that of our villain. We get to know what each character is feeling at the same moment because her chapters are broken down into each character’s mind. I was  a big fan of the choice of villain in this finale. Osaron thinks himself a god, but the hero crew knows that he needs more than he is willing to admit to himself. They take advantage of the fact that to fight, he needs a physical body. I also enjoyed that Schwab makes Holland a more complicated character. All he wanted was to save his White London from a terrible fate, but he brought death and destruction to Red London and nearly to Grey London. He knows his mistake and therefore is the one to sacrifice everything to right his wrong. There is also a lot of betrayal within the castle during the fight with Osaron that made the story all the more entertaining.

Schwab did a beautiful job with the series and I’m glad to have gone on the journey. 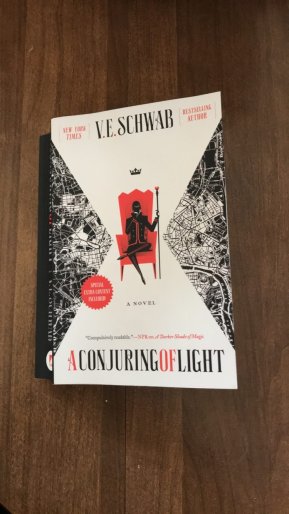