Jude and her sisters were taken to Faerie after their new father figure murdered their real parents. Now they live among the Folk as daughters of the most militarily powerful man in the land. They learn with the gentry children, go to royal balls, and mingle with the royal family of Faerie. The problem is that Jude’s main enemy happens to be the youngest Prince Cardan whose cruelty toward her outdoes even the man that killed her mother in front of her. When plans are set into motion to replace the royal family of Faerie, Jude must learn to work with the person she despises over everyone. Can she and Prince Cardan deal with each other long enough to save Faerie?

I both love and hate teen fantasy at the same time. The stories are usually so entertaining. They are full of magic, fantastical beasts, and lots of fighting action. But it never fails that I always wind up wishing that this book was written for adults instead of teens because the writing is so juvenile. It’s not a bad thing really, I just always want characters to react how I would I suppose. I want them to curse. I want good sex scenes. I don’t know, maybe Game of Thrones has completely ruined fantasy novels for me.

What I did like was they was this story had so much strategy in it. The twists and turns had me trying to guess what was going to happen next, and honestly it did not end the way I expected it to. Black has an excellent mind for battle descriptions and how a military mind might think. The whole book was like watching a chess match of royal siblings that Jude and her family happened to be a part of. It was a very promising start to what should be a great series. 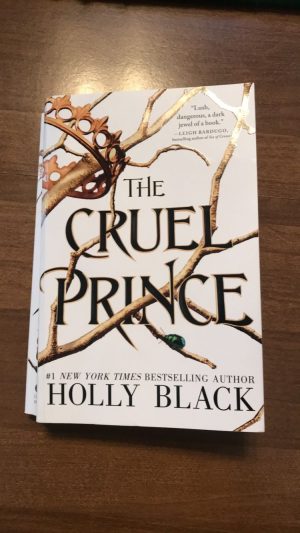