First and foremost, this is not a biography like I thought it was going to be. This is a history book about World War II. Which was kind of a surprise since the description of the book makes it out to be more biographical about the three most important American men in London at the time of the war. Now, this did not make me like the book any less. I thought it would honestly, but it was so well-written that I didn’t really care in the end that the book was more about Roosevelt and Churchill than the American liaisons in London.

From the description of the book, it was supposed to be about Averell Harriman, John Gilbert Winant, and Edward Murrow, the three most influential Americans in London at the time of World War II. Winant was the American envoy to the United Kingdom and every Londoner’s favorite person. He was all about the people at the height of the war sometimes avoiding other officials in favor of speaking to soldiers. Harriman was the U.S. representative sent to London in order to oversee the distribution of Lend-Lease funds for England. He managed to get more attention that Winant by befriending Churchill and getting in on many private meetings. Murrow, the most famous voice from World War II, was the U.S. CBS news correspondent who brought the sounds and descriptions of the war into American and British homes.

The first half of the book read like I thought it would. We got backgrounds on all three men and their experience in London during the Blitz. We learned how each man was received by the London population and how their experiences helped them influence President Roosevelt into entering the war to aid England. The second half of the book read more like a history book. We were mostly told about military men and military strategy. We did get to meet more influential Americans such as Dwight Eisenhower and Tommy Hitchcock and we were told about their experiences in the war as well. Near the end, however, the book kept alluding to the three main men and how they adjusted to the end of the war. I just thought that it was kind of a weird mix reading about Roosevelt and Churchill’s own strategies while also learning about the personal lives of these men after the fighting ended.

Overall the book was extremely well-written. Olson was able to capture the passion of the London citizens as well as the passion of the American men that they welcomed into their lives during their darkest period in modern history. 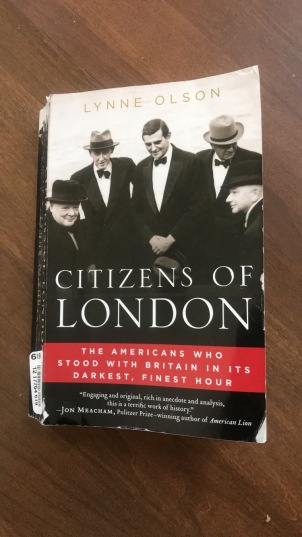